Plant roots exude a diverse array of biologically active compounds, which have the capacity to shape the microbiome that is associated with roots. These exudates alter the chemistry of exposed soil, and can recruit bacteria and fungi to the root. Some of these microbes, such as plant-growth promoting rhizobacteria and mycorrhizal fungi, have the ability to suppress plant disease through a range of mechanisms, including production of fungistatic secondary metabolites, competition for iron, and elicitation of induced systemic resistance (ISR), which is marked by priming of jasmonic acid-inducible genes in the leaves (1,2). 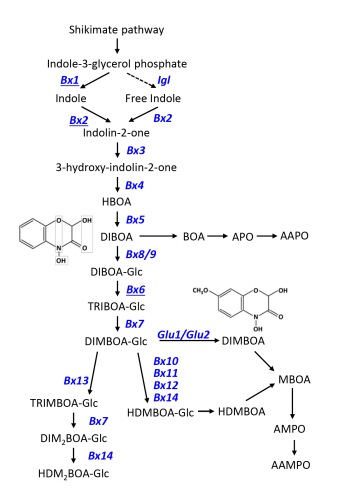 In cereals, benzoxazinoids (BXs), such as DIMBOA, represent an important class of secondary metabolites that influence belowground and aboveground plant-microbe interactions. Since their identification as defence metabolites, investigations have mostly focused on their role in defence against aboveground pests. BXs are typically produced during relatively early, vulnerable plant growth stages. After tissue damage, vacuole localised BX-glucosides become hydrolysed by plastid-localised β-glucosidases, causing rapid accumulation of aglycone BXs with biocidal activities.

BXs are also active against attackers that cause relatively minor tissue damage, such as aphids and pathogenic fungi. Previously, we discovered that this activity is based on  increased accumulation of DIMBOA in the apoplast before the onset of large-scale tissue damage, where it signals increased deposition of callose-rich papillae (3). Thus, the role of BXs in aboveground cereal defence is not limited to their biocidal properties, but also includes a within-plant signalling function in the activation of plant innate immune responses against pests and diseases. 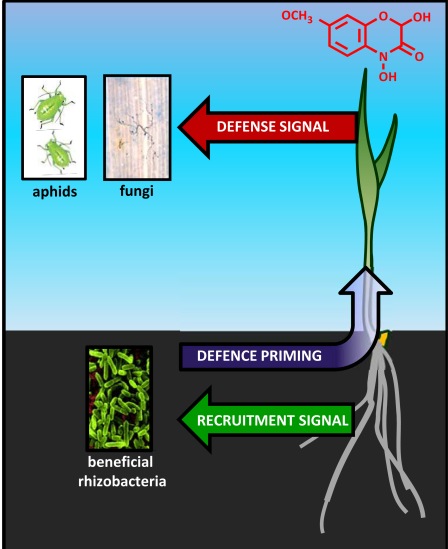 BXs have been implicated in plant defence belowground, where they are exuded from cereal roots as allelochemicals against microbes, insects or competing plants. We recently discovered an additional function of root-exuded maize BXs in recruitment of plant- beneficial rhizobacteria (4). We identified DIMBOA as the dominant BX in maize root exudates. Transcriptome analysis revealed that exposure of Pseudomonas putida to DIMBOA induces bacterial genes involved in chemotactic responses. In vitro chemotaxis assays confirmed that P. putida displays taxis towards DIMBOA. The ecological relevance of this response was subsequently confirmed by root colonisation assays in soil, using maize mutant lines that impaired in BX biosynthesis. These experiments demonstrated a reduced colonization by P. putida on roots of BX-deficient plants (4). In a subsequent study, we found that BX-deficient mutant plants failed to develop aboveground defence priming when grown in soils containing resistance-inducing P. putida bacteria (5).

Our current research uses genetic mutations in the BX pathway of maize to study the role of these plant environmental signalling molecules in orchestrating root exudation chemistry and shaping disease-suppressing microbial communities in the rhizosphere (6). This research also involves method development, which allows us to improve our study of the interplay between disease-suppressing microbial communities and rhizosphere chemistry (7).

This research is particularly useful in the fight against cereal pests and diseases. By breeding cereal varieties that are better at defending themselves against below- and aboveground attackers by recruiting disease-suppressing soil bacteria, we can reduce reliance on chemical pesticides.

Co-director of the Plant Production and Protection (P3) (2014 – Present)